Algorithm for inferring the offer chances of JUPAS programmes

“Offer chance” indicates the possibility of obtaining an offer from the JUPAS programme. It is estimated by calculating the score from the exam results entered in “My HKDSE”, according to the scoring system and subject weightings of the programme, and comparing with the admission scores in the past years. More the star symbols, higher is the possibility of obtaining an offer. The highest possibility is indicated by 5 stars. Interview, test and other non-academic performances are not considered in the estimation. The estimated possibilities are for reference only, and are regardless of the actual offer results. We do not take any responsibility for the accuracy of the offer possibility estimation. 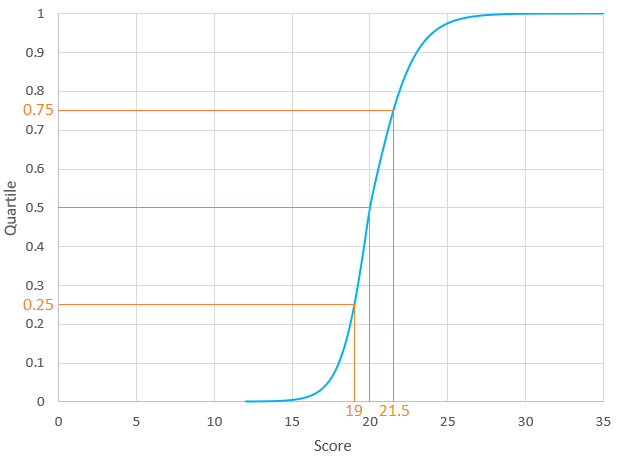 Step 2: According to the scoring scheme of each programme, calculate the score from the result entered in "My HKDSE" by the user. The weightings of the specific subjects have been included in the calculation. Some of the institutions indicate the subjects with heavier weightings without the actual values. In this case, BigExam defines the values of the weightings as listed below.

Step 3: Using the score obtained from Step 2, look up the corresponding quantile from the cumulative curve in Step 1. Higher the value of the quantile, higher is the chance of receiving offer of the programme. The same algorithm is applied to the admission score of each past year to obtain a series of quantiles. The weighted mean of the series of quantiles is used as the final estimation of offer chance. The offer chance is expressed in 6 levels. The definition of the levels are as follows.

If user’s result does not meet the minimum entry requirements of a programme, offer chance estimation will not be provided for that programme.